22/7 Idol Group: What is that and all you need to know

The young girls appear from eight uniformed female anime characters. On July 22, the digital idol group "22/7" (nana-bunno-nijuni) used the concept as a challenge.

They have released their debut single in September. This "idol seiyuu digital" project is a new project developed by Akimoto Yasushi after successfully bringing the names of AKB48 and others to the world scene.

22/7 is produced by Yasushi Akimoto, while Sony Music Records (SMR) works for music, and Aniplex (ANX) is responsible for animation production. The announcement of this project was announced in October 2016 and first aired on July 17, 2017. The single debut was released in September and immediately spread quickly. 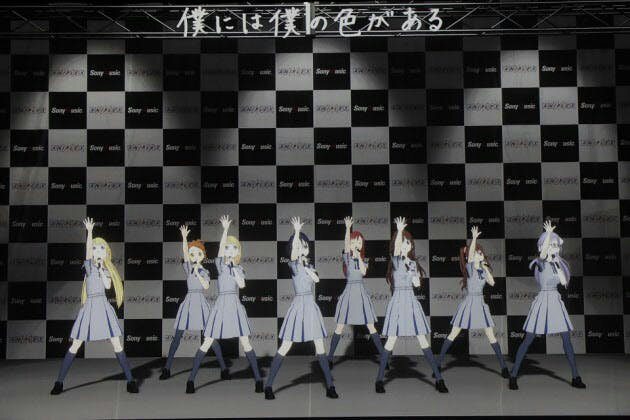 In the national peridolan world, Akimoto Yasushi has orbit many big names such as AKB48 and Nogizaka46. While in the anime world, "Love Live" is also very famous. Then, what is the difference between idol seiyuu with idol in general?

"Firstly, the selection criteria for candidates for seiyuu are somewhat different from normal idol criteria in general. At that time Akimoto Yasushi-sensei said that he wanted to create a digital idol group by cooperating with the Aniplex group. Since then we started launching this project ", said one of Sony's staff.

Aniplex is a great hit pioneer of 'Idol Master' in the anime world. "I think to take advantage of Akimoto's passion as well as possible by using the technology we have developed. And we also want to devote each character 22/7 in order to attract the enthusiasm of Japanese anime world ", said the person in charge of Aniplex.

The profile settings and personality of the 22/7 character are set directly by Akimoto himself. Furthermore, the characters are drawn by renowned designers. Such as Yukiko Horiguchi-sensei ("K-ON!") In charge of designing otaku characters Takigawa Miu. And there's also Shiga Tanaka-sensei ("Kimi no Na wa") who chose to design a tsundere girl character named Toda Jun.

Previously, another Akimoto-sensi-made idol animation named "AKB0048" was still associated with idol group AKB48. But "22/7" is different, because they start from scratch. At the final audition last December 2016, eleven people have passed the audition. As a result, there are three members who do not get the character.

So far they use unique promotional methods. Eleventh members routinely hold live streaming on SHOWROOM apps in turn, regular cultural appearance of Broadcasting, regular reading of cultural broadcasting, and so on.

In addition, the 22/7 series has also been released in the weekly "New Type" animated magazine by Akimoto-sensei and Horiguchi-sensei. The music video released in August combines the characters and members themselves with full 3DGC using motion capture technology, just like when it's live.

"Because the animation project takes time to produce, I plan this project every year. Moreover 22/7 has all the functions of music, animation, and management. But Akimoto-sensei keeps seeing fans' reaction at once. And since we are still in the same group, we can respond to them flexibly ", said the person in charge of Aniplex.

After the debut single "Boku wa Sonzai Shiteinakatta" released last September, animation production will soon follow. "The real sensation of an idol is to see how they struggle and try to be an ideal seiyuu", said the Sony staff.

This unlimited project aims to capture the psychology of fans by utilizing music and animation at once. The value of both experiences has the potential to create new winds in the entertainment world of the future.