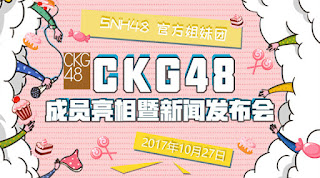 After forming a group sister in Beijing (BEJ48), Guangzhou (GNZ48), Shenyang (SHY48), a new group of SNH48 sisters was re-established in Chongqing (CKG48).

CKG48 for the first time will hold a press conference and debut member on October 27, 2017. The event will be held at CKG48 Star Dream Theater located at Chongqing Guori Center.

Four members of the four sister groups SNH48, BEJ48, GNZ48, SHY48 will certainly be present in this event. In addition, the media crew will be present to take note of those shiny moments.

At a press conference, Team C and Team K CKG48 will be unveiled at the same time. The CKG48 members will also celebrate its debut in November 2017.

The inauguration of the team will mean that the SNH48 GROUP team is expanded from 13 to 15 teams. At that time, CKG48 Star Dream Theater will also begin to be used.

As the 4th group sister of SNH48 and the first group sister in the southwestern region of China, CKG48 is expected to become the new icon of the mainland in China.

CKG48 fully absorbed the SNH48 concept with its motto 'Dream, Sweat, Thrill' with other sister groups ready to build strong influence to become the number one idol in China and determined to become national idol.