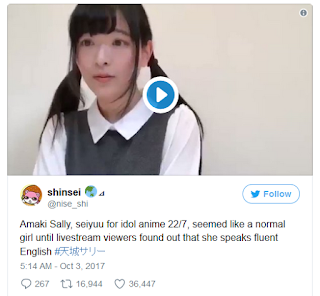 Sally moved to Japan, took many auditions, and is undergoing training every day. She didn't work this hard for people to come laugh just because she's a cute Japanese girl talking about memes. She's human.

"at 22/7’s first hi-touch event, the staff told me to be gentle with fans because i was high fiving them too hard

I watched this documentary about crab mating season...then I had a dream I was a crab and couldn't find a girl to marry

"sally you look cute in twintails"
I gotta be cute every now and then cause like...I am an idol...they pay me for being cute

I showed the 22/7 members every pepe and doge meme there is, but they didn't think they were funny. I guess they don't get it #天城サリー

someone said i was untalented & that I could only dab & spell gay in English correctly.. idk about you but that sounds like talent to me

One day i shaved off all my eyebrows..i drew my eyebrows on with eyeliner..let me tell you the only thing straight about me were my eyebrows

"do you have biceps?"
biceps?...bi?...i need to stop making these jokes because then people are gonna think I'm kidding & I'm not

“sally would you date a girl?”
i would date anyone i like, im not gonna limit myself

I used to always go to the beach and I was so tan I was like 50 shades darker than this....eheh that was a pun

I agree I should be a better president than you know...donald McDonald