Odon: What Do You Do During Your Joining at JKT48?
Della: A lot of it, from trainee to team as well. Up to have a group of jokes themselves, usually when other members just dance, sing, fans a lot, here if I'm different type with other members because maybe I have a group of myself, three. 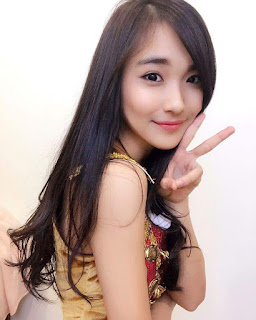 Odon: What Reason Do You Want to Join In JKT48?
Della: I used to be honest for fun, because I did not know JKT48. It used to be syutinh ad with JKT48, but I do not know what JKT48 is. Finally I'm list-idle, because I'm Confident person, "I'm beautiful, I'm sure I'm joined", in fact I'm selected to join. So my confidence brings a blessing.

Odon Team: Ever Feel Giving Up All Your Time Create JKT48? When?
Della: 4 years ago, my school is still relaxed, not college yet. So I gave up all the time to JKT48. The totality and professionalism that I am.

Odon: What Want To Be Achieved As a JKT48 Member in This Year?
Della: I want number one in sousenkyo, I'm two years so undergirls constantly being sousenkyo I want senbatsu to keep number one. Definitely different, surely the CD is more salable like the old KFC era. It must be great.

Odon: What Do You Want to Reach Over at JKT48?
Della: Hopefully you know not only in Indonesia, so I want JKT48 to be known everywhere. Even outside Indonesia, abroad, all know JKT48.

Odon Team: Already Passing A Lot Of Time With JKT48, When and What's Your Favorite Time?
Della: Every time JKT48 holiday, not because I do not like JKT48 activities only when our holidays even more familiar with the member. Because we still meet members like "I Lost", but we met yesterday. We also do not understand what our minds are, it's just that I really like the holiday because I can play with other members.

Odon Team: What is JKT48 Implementation Actually?
Della: Where I work, where I study, school, JKT48 is the place to learn a lot of things. It's amazing how long ago Della did not know the times, the modern times. I used to be very traditional in my mind, since in JKT48 my mind was very modern because it met so many people. His mind became meaningful, some were from Japan, so more advanced I was in JKT48.

Odon Team: What's the Difference Before and After Idol?
Della: Before I was in JKT48, I was ugly, afterward others would have thought I was silicon. I'm also confused like the aura of the ancients I senbatsu maybe that. Then it was before JKT48, followers me a little, and after at JKT48, followers I'm a lot till sometimes do not follow-follow me just do not stop follow.

Odon Team: What's The Message For Fans?
Della: This is for Della fans yes, who are not Della fans may be Della fans. The message for my fans, hopefully still support Della, although Della has changed. Be thankful you guys Della has changed, because Della who you must know Della was like what on television is very ugly until now meme is still there, hope you still love Della, the more support Della, the more support Della's career in his team J also, schools and others essentially all in your support.