Together with Mina, SNH48 will Hold the Third Fashion Award 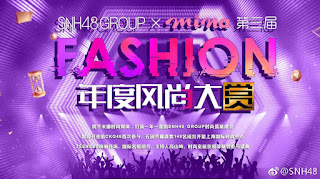 Together with one of the fashion magazine 'Mina' companies, SNH48 will hold a third Fashion Award. Mina is a company that publishes Mina Magazine originating from Japan.

Previously SNH48 never announced this cooperation in the selection of the fourth most popular idol SNH48 GROUP last July.

SNH48 will invite their group sisters BEJ48 (Beijing), GNZ48 (Guangzhou), SHY48 (Shenyang), and CKG48 (Chungking) to participate in this event.

The event will be held on November 18, 2017 at the Shanghai International Fashion Center.

International supermodel Hu Bing will be the guest star in this event. Fashion fashion awards this time will be guided by Gao Shanfeng or better known as Mountain Kao.

During this event, 7 members with the best achievement will be awarded as 7 fashion goddesses who are incorporated in the sub unit 'Style 7'.

In addition 16 members of the highest vote count will become fashion artist 'FOCUS-16', they can make the site and social media fashion store itself.

The fashion goddess champion aka TOP 1 will be the cover girl of Mina Magazine. While TOP 1-3 will attend international fashion event with Hu Bing.