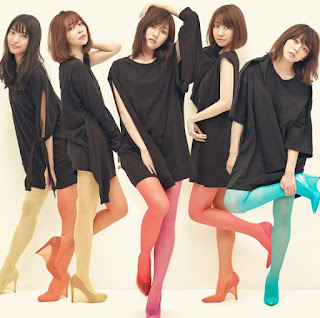 The single cover is handled by Hirano Fumiko who also directed the MV '11-gatsu no Anklet '. Cover Limited Edition shows members with black dress with stockings of different colors for each member. As for Regular Edition, will show the face with a rainbow line that appears near the eyes of each member.

And for Theater Edition, 28 Senbatsu members are lying in a circle with the left leg stretched and the right leg bent and forming a colorful gradation of the rainbow.

As for alsan wanting to feature a rainbow, Hirano revealed that he wanted to express a rainbow that also appeared on the MV '11-gatsu no Anklet'. "I hope the stunning rainbow colors await their future lives [members]."

The filming of AKB48 '11-gatsu no Anklet 'MV was performed mid-September. Set against a gray cloud, Mayuyu, wearing a red parka with a red anklet tied around her right ankle, ran and danced in a joyful way.

The MV was directed by Hirano Fumiko and became her first collaboration with AKB48 Group. Regarding the director's figure, Mayuyu commented, "I really like and admire her works, I'm glad he directed my graduation MV."

While Hirano commented, "Since this Mayuyu's MV graduation, I want to show the side of Mayuyu including her kawaii side, I think of him who will graduate from the figure of an idol and will break the shells and face her new world.Shooting process is accompanied by bad weather but I want to show a cheerful member with their laughter while waiting for a beautiful rainbow. "

This MV tells the story of a girl who has grown up who ended herself in the past and started moving towards her new future, an MV that expresses the journey of a Mayuyu who has joined AKB48 at the age of 12 until her graduation at age 23.


The MV was directed by Takahashi Eiki where Mayuyu himself who wanted her graduation song MV was dirutai by him. Regarding the reasons for choosing Takahahsi Eiki, Mayuyu said, "Many of the members' graduation songs have been directed by him and most of the MV AKB48 that I was involved was also directed by him so there is a sense of security from this longstanding relationship of trust".