Yumemiru Adolescence has announced that they will soon be releasing their new single "20xx / Exceeeed !!". The single, which will be the 10th single for the group that has made its major debut in 2015, will be released on November 15, 2017. The single was released in a double A-side format.

The song "20xx" (read: Nisen Kiss Kiss) is a song created by Nakamura Kanata as lyricist, musician Sasaki Hiroshi as composer, and Ushio Kensuke who arranges the song arrangement. 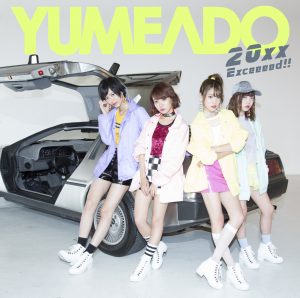 The song has also been selected to fill the closing theme of the anime titled "Time Bokan - Gyakushu no 3-Akunin".

So even with the song "Exceeeed !!" which is also selected to fill the theme song of the entertainment event titled "Copinks! 2020 ". The song was made by guitarist SCANDAL, MAMI, and musician Eguchi Ryo.

Single "20xx / Exceeeed !!" will be released in 3 different types with varying prices. Type First Press which contains CD and DVD for 2000 Yen. Regular type and limited type containing only CDs sold for 1000 Yen.

Each order is 1 single, buyer is entitled to 1 vote which can be given to one of the audition's contestants.

Here's how the single "20xx / Exceeeed !!" shoppers can do to be able to vote on the contestants of Yumemiru Adolescence auditions:

By ordering the single "20xx / Exceeeed !!" when Yumemiru Adolescence held events at several music stores in Japan. The subscriber will get a voice filling sheet which can then write down the name of the contestant you want to select.

By voting via online. Any CD "20xx / Exceeeed !!" that has been received will also be attached a code to get into the menu available on the polling site later. This method can be done when the single has been released and the buyer has received the single.

The voting period has been open since 7 October, and will be closed on 3 December. Profile of 14 candidates for audition of new member Yumemiru Adolescence to choose from: sonymusic(dot)co(dot)jp/Music/Info/yumeado/audition/profile/