Abe Maria will Hold Her Last Performance as an AKB48 Member 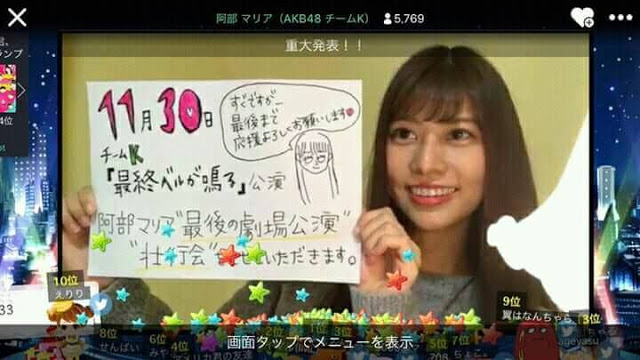 AKB48 will lose one of its members from Team K formation Abe Maria. The girl who is often called Abemaru does not graduate from the group but will be sent to a member of Taiwan-based group AKB48's sister group TPE48.

This move was announced at the announcement of TPE48's first generation audition in Taipei some time ago.

After 7 years at AKB48, Abe Maria wants to say goodbye to fans for this move. Her activities as an AKB48 member will end on Team Teater's 'Last Bones' Show on November 30th. She announced it on live broadcast via SHOWROOM. After that he was officially sent to become a member of Kaigai TPE48.

Abe Maria is a member of the remaining 10 AKB48 generations. She said was happy to be a member of TPE48.