After School Horror 2: Indonesian Movie for Teenagers Full of Tension 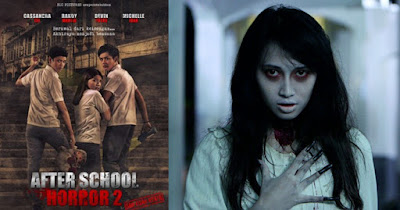 "This movie I treat like my own child, so the level of care is more awake, and will still target the teen audience," said Nayato in Jakarta, Friday (10/11).

He told me, all the process of taking scenes and pictures of the film that began circulating on Thursday (16/11) ahead of this, even do not hesitate to do repetition or repetition, in order to get the picture and scenes according to his will. Taking a long shoot scene, medium shoot, close up and extrrime close up, continue to be done.

Not only the scene from the front, from the side, to the back and up also continue to do the iteration. Repetition of the scene is certainly exhausting, but it is so tricks in giving birth to a movie. "Create a stock of scenes in the editing room," he said, about the filming of his latest film.

Therefore Nayato also continues to ask all artist pelakonnya to appear spartan, serious, wholehearted, and total, in order to get maximum results.

"I am very confident the audience will be satisfied with this second squel" he added with a serious face.

Nayato sure, good movie, will be able to tell well too. "Because Film as good as any if the story is not good, will be left by the audience," he said.

It is justified HM Firman Bintang, owner of Production House BIC Pictures. Therefore, he cautioned Nayato to keep After School Horror 2 stories as good as possible, to be accepted by the audience.

"All this time BIC Pictures with Nayato movie, Alhamdulilah get a remarkable response from the national film lovers community. Because the story factor is awake, one of them. There are still four more films in the future, after this film, "said Bintang who is also Chairman of the Indonesian Film Companies Association (PPFI).

Firman does not just give tips to Nayato, also to the crew and the actors involved in every project to not just make a movie, so that the end result of the film can be accepted by the public.

"All involved in this movie, not just playing in the movie, but also have to give his heart. Thus it will give a good effect for the cast itself, and more important is the end result of the film, "added Firman Bintang.

On the advice that, Cassandra Lee, Randy Martin, Yuriko and Devy Putra and other supporting artists to play a total in this film.

"I am lucky and very happy to be involved in this movie. Although it must be pursued chase devil the creepy, "said Cassandra Lee.

Randy Martin, who says, "After School Horror 2" will be one of the most exciting, scary and entertaining national films this year. Loss and regret if not to watch ", said Randy