JKT48 news English Translation: 18th Single to be released titled 'Dirimu Melody' detail how to download and all you need to know 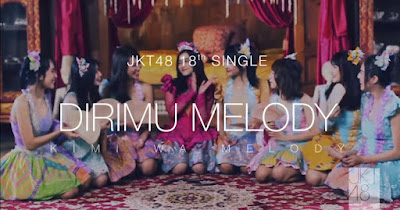 The single has entered the stage of music video production (MV) which has taken the filming location in Yogyakarta. By carrying the concept of Melody own Java culture, JKT48 appear more elegant by wearing a uniform of Batik and Kebaya blend. Curious about this JKT48 music video Indonesia? following the trailer.

The single will be performed by 16 members of JKT48 who are often called senbatsu.

Melody's last single, she will be the center of the song. The remaining JKT48 first generation members became senbatsu also at the request of Melody.

Reportedly this single will be released in December 2017 and will be delivered for the first time in a special Handshake album 'BELIEVE'.