Full Review Vivo V7 User Experience, Is it really worth to buy? 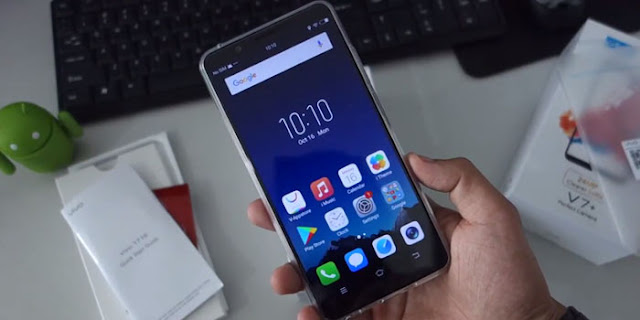 During the day of its launch and the next few weeks, Vivo V7 became the talk of Indonesians because it was broadcast nationally. Vivo itself rely on V7 with FullView FullView with 18: 9 aspect ratio and 24 MP selfie camera.

Although with one camera on the front, but Vivo also gives the ability to take a photo selfie bokeh. In addition, you will find an additional case and tempered glass jelly casing that is mounted on top of the screen in the sales package, Well, for you who want to know the performance, features, and capabilities that can be done by Vivo V7 + then can see it in the following article review :

Vivo V7 has a screen size of 5.99 inches different from other Vivo smartphone because it uses full screen on the front so it has an aspect ratio of 18: 9. Although the screen has IPS LCD technology and HD + resolution (1440 x 720 pixels), but I feel comfortable to see the screen when used everyday. In minimizing the occurrence of scratches, Vivo has provided glass scratch-resistant Corning Gorilla Glass 4 on the screen.

The navigation keys of this smartphone are virtual shaped inside the screen. In addition, the home button is removed and the fingerprint sensor is placed on the back. For the right side there are volume and power buttons are placed parallel to make it easier for a combination of screenshots.

In addition, at the bottom there is a 3.5 mm audio jack port for connecting with earphones or headphones, microUSB port for charging or data transfer, and speakers. While on the left there is a SIM Tray with 2 SIM card slot and 1 microSD slot.

Vivo V7 is the world's second smartphone with 24 MP front camera with f / 2.0 aperture and moonlight flash which can produce excellent selfie photos. In fact I can produce instant selfish bokeh photos (background blur), even if only using one front camera only.

But the blur level of Vivo V7 camera can not be set like Vivo V5 Plus which has two front camera 20 MP + 8 MP. Not only that, Vivo V7 front camera is also capable of producing a live photo that moves a few seconds and group selfie who can take selfie or wefie photos with a large area.

While the rear camera has a resolution of 16 MP with f / 2.0 aperture and feature Phase Detection Autofocus which is able to produce images with good. To help the rear camera take photos in low light or dark, Vivo has embedded the LED Flash right to the right of the camera.

Various modes have been presented in the default application for the rear camera, such as Panorama, Ultra HD, PPT, Professional, Slow, and Time-Lapse. Front and rear camera is also equipped with Face Beauty feature that can produce a user photo with a smooth face. Well for those of you who are curious about the images from the front and rear camera Vivo V7.

In other words Snapdragon 450 has an efficiency in battery consumption, but has a performance that can be spelled out powerful. In offsetting the ability of the processor, Vivo has equip V7 with 4 GB of RAM. In addition, its internal storage also reaches 64 GB capacity.

When I run multitasking applications, like email, chat, SMS, phone, and more, Vivo V7 is able to show stable performance without a hitch. Meanwhile, when used to play heavy games, such as Need For Speed No Limits, Asphalt 8, and NOVA 3, this smartphone is able to run smoothly.

The battery pinned on this smartphone is big enough to reach 3,225 mAh. Meanwhile, the battery of the Vivo V7 is able to survive long enough thanks to the use of Qualcomm's Snapdragon 450 processor that has the efficiency in consuming energy. Unfortunately this smartphone is not supported with fast charging so that charging from 0 - 100% done within 2 hours 10 minutes.

Battery life of this one smartphone can be spelled out long that can reach 11 hours from 100% to 15% condition for standard use on everyday activities, such as Messaging, Browsing, Chat, and phone. But the conditions will be different if used for playing games, browsing non-stop, watch the video continuously, or use two SIM cards at once.

Before launching a smartphone with a large-resolution front camera, Vivo has been known to produce smartphones with Hi-Fi capabilities to listen to music. With the presence of an AK4376A audio chip that can produce Hi-fi capabilities it can make the sound quality generated by the smartphone will be crisp and melodious when you listen to the song.

To be able to use this feature, you can open the built-in Vivo music app called iMusic. Later just press the Hi-Fi button located at the top right of this application. For the record, this Hi-Fi technology can only be active when you use earphones or headphones.

One feature that has not existed in the Vivo V family of previous generations is Face Access. With the presence of this one feature allows users to unlock the smartphone quickly only 0.1 seconds only when the smartphone is faced into the face of its users.

Unfortunately this feature can not be active when the screen is in a state of rest, so must press the power button first to get into the lockscreen and the front camera of the smartphone can instantly recognize the face quickly.

Meanwhile, the Vivo has been outsourced in order to be opened without the need to touch the power button by activating the Raise to Wake feature that allows the screen break can enter into lockscreen mode just by swung it. But sometimes when swung, users have to wait a while or not enter at all into the lockscreen mode.

Unlike the family Vivo V5 which on average has a fingerprint sensor on the front, this time Vivo pinned the sensor on the back of the V7 because the screen has filled the front.

This one feature allows Vivo V7 users to multitasking applications easily, where two applications can run in one screen. For example, users want to watch videos while chatting.

Even when users are cool to open a video or chat and want to open one more application then live gesture 3 fingers by sweeping the screen from top to bottom then automatically some supported applications will appear and users can directly select it.

This is actually almost similar to the Dual-split built-in feature that is owned by the Android 7.0 Nougat operating system and up. Smart Split 3.0 itself supports Facebook, LINE, Messaging, WeChat, WhatsApp, YouTube, Video, VLC for Android, MX Player, watching movies & TV, and streaming video.

This one feature allows users not to be disturbed by phone calls when playing games. Some of the modes that come in this feature consist of Block floating previews, Reject incoming calls, and Background calls.

Block floating previews will allow the phone call dialog box to float, but the user can still play the game so that it can be decided to be lifted or rejected.

Furthermore, Reject incoming calls make it possible for all non-whitelist phone calls to be rejected or closed. Last Background calls, allowing users to receive a phone when playing games and using a headset, the call will run in the background and users still play.

Since Vivo V5s, this one feature is already commonly present in Vivo-made smartphone, including V7. With the presence of App Clone feature allows Vivo V7 users can activate two application accounts at once in one smartphone. Some apps already supported by App Clone include WhatsApp, LINE, BBM, Zalp, Viber, and WeChat.

Almost the same as the previous Vivo V5 Plus series, Vivo V7 has the ability to take long screenshots or commonly called scroll screenshot. This will be useful when you want to capture a web page that is being targeted because it usually has a long page.

At a glance, this long screenshot has a maximum limit of 15 pages to be used as a screenshot image. For Gadgeter who want to access it in Vivo V7 then can directly sweep the screen from under the screen to the top and then select the S-Caputre menu.

Later you will be presented with 4 menu choices consisting of Long Screenshot, Rectangular, Funny Screenshot, and Screen Recording. Then, you can select Long Screenshot and choose the Next menu on the bottom right of the smartphone. Once completed then can choose Save menu.

After using Vivo V7 for several days, you can say the results are satisfactory when used for everyday activities, playing games, watching videos, and browsing and chatting.

Meanwhile, 24 MP camera, the screen that meets the front with 18: 9 aspect ratio, Snapdragon 450, 4 GB RAM, fingerprint sensor, and Face Access can be added value offered by Vivo against this V7.

Unfortunately the rear body material of this smartphone is still using polycarbonate (plastic) and Matte Black color that I hold hands easily leave fingerprint marks. For that, Vivo pinned an additional jelly casing to protect it from dirt and also from scratches.

Battery Vivo V7 smartphone is also not equipped with features fast charging battery so I have to wait quite long in charging the battery.