How the Future of JKT48 following Melody Nurramdhani graduation 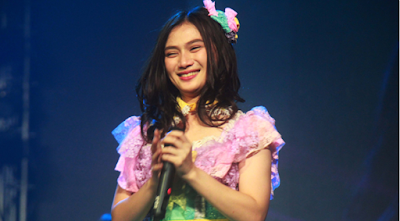 Melody herself has joined JKT48 for about 6 years as a member of the first generation and most senior among the other members of JKT48.

Suddenly her statement was greeted by the sobs of the other members of JKT48, including her sister Frieska Anastasia Laksani who did not even think that Melody would announce her graduation at the event.

During this time Melody is known as a member who became a symbol of JKT48, a hard worker and role model for her junior. Surely this is a huge loss for JKT48, especially not long ago Nabilah Ratna Ayu which according to the fans prepared as a member who will be a substitute for Melody in the future also announced her graduation from JKT48, because she wanted to focus with her education.

Although Melody acknowledged the decision was not an easy thing, but according to her, now is the time for her to dare to realize her dreams other than idol world.

"I have been around 6 Years joining JKT48, I have dreams that I can realize but now is the time that I feel right to pursue and achieve my other dreams out there, outside JKT48".

Eits, but for you Melody fans do not have to worry, despite announcing her graduation from JKT48, but Melody will remain active as a member of JKT48 until her last show will be held to coincide with her birthday on March 24, 2018.

With the passing of Melody later, only 7 members of the first generation are left; then whether JKT48 can survive? Can the remaining first generation members remain pioneers and bring back JKT48 to the peak of its prime?