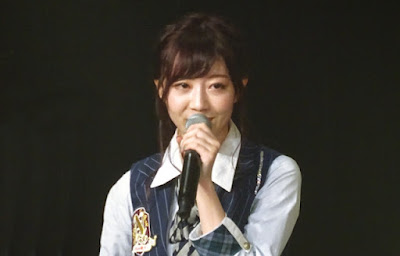 Member NMB48 Matsumura Megumi has announced her graduation from the group during a theater group performance held on October 2, 2017.

In the announcement, Matsumura conveyed, "I, Matsumura Megumi will graduate from NMB48." Matsumura further said, "I have joined the group for 5 years as part of Generation 4. 5 years which not only filled with the happiness but frustration that sometimes want to escape me, but with the support of the fans I can face any situation and step forward."

Regarding the reason for her graduation, Matsumura explained, "During the graduation ceremony at NMB48 I put on a new dream of acting, so far I've played in four stage plays, I want to learn more and want to play more stage plays and to achieve my dreams , I decided to move forward. "

Regarding her graduation schedule, Matsumura said, "I have not decided the exact date but probably in December of this year."

"I apologize for announcing it on the spot.The availability of supportive fans is very important for me and my fans' support will be very much needed from now on, I will continue to show my best until my last day in NMB48, please keep support."

Matsumura Megumi joined NMB48 in December 2012 as a Generation 4 group. When NMB48 held 'NMB48 Arena Tour 2015 ~ Tookunitemo ~' in February 2015, Matsumura was promoted to Team M until transfer to Team N when NMB48 held a shuffle team in January this year.