On November 27, 2017, Nogizaka46 member Hori Miona was present at the Fuyuka bookshop in Tokyo to hold a celebration of her 'Kimirashisa [君 ら し さ] photobook release event which was released on November 24th. 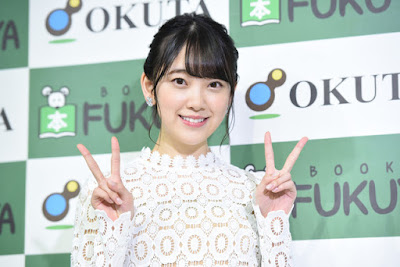 'Kimi Rashisa' became Hori's photobook and took the location of the shoot in the United States. In this event, Hori tells of herself eating her favorite food, Hamburger, including eating about six jumbo-sized hamburgers that exceed her height.

Hori also revealed a picture of herself wearing a straw hat that shows her teeth as her favorite photo in this photobook.

Asked if any member of Nogizaka46 had seen her photobook, Hori replied, "Captain Sakurai Reika-chan and Gen-1 Takayama Kazumi-chan have seen it, and they praised my photo in pink clothes."

As for the photos of him in a swimsuit, Hori commented, "The embarrassment is there, but because it's my first photobook I want to make it a good work, I'm not an actress, but I'm trying to try different expressions."

With a wide range of work that he achieved this year, Hori was asked to use a kanji character to present a year that she has experienced, Hori revealed the kanji "堀" taken from her name. Hori explains, "Being a regular model magazine 'ar', releasing a photobook, acting as a front row member, I might have been known by people as Hori Miona, a member of Nogizaka46.Next year I want to shine even more as a personal Hori Miona."

Like the other Nogizaka46 members who were asked about the score given to their photobook, Hori also get questions about the score she will give to her photobook. Regarding this question, Hori replied, "Well, 95 points, just under 100 points because I want to keep fighting hard, I'm happy with this point."

After releasing a photobook, Hori was asked what she wanted to accomplish next. On this subject, Hori replied, "I want to act, I want to play a role with a different character from my personality.By various roles, my personality can also be a variety of characters, I want to be a chameleon [has various character] character."