Team X has sailed for treasure with the spirit of adventure through their theater performance 'The Dream of The Flag / Mengxiang de Qizhi'. Over a year after year Team X plunged the sailboat of their dreams. Team X will still pay their battle through their latest repertoire or setlist titled 'Mingyun de X hao' or 'Fate of No X' / 'Fate of X Number'. 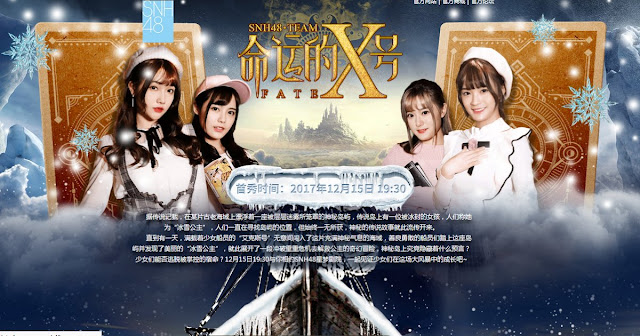 Told in a legend, there is a mysterious island that is covered and shrouded in mist. Legend has it that there lived a frozen daughter, the man called her the Ice Princess. Many people search for the existence of the mysterious island, but the reality is nil.

One day the girls of X accidentally broke in and landed on the mysterious island. They then search for the existence of the frozen princess and save. In their daughters rescue mission faces a fantastic adventure. What makes the island hidden? Did the girls of X escape the controlled fate?

Intrigued by the fate of the girls X? Immediately meet them within the first day (shonichi) of this new Team X setlist 'Mingyun de X hao' on December 15, 2017 at 15:30 CST. In telling this new adventure will be packed with 16 very interesting songs. Here is the repertoire of 'Mingyun de X hao'.

Look forward to this new Team X setlist on shonichi that you can watch through Youtube SNH48 channel. What is the fourth stage of the X Team theater?