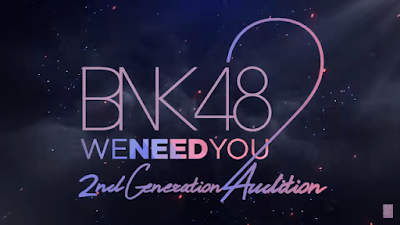 Video clip MV Koisuru Fortune Cookie has been watched more than 5 million times on Youtube. The good response from the community towards BNK48 made the group progressively step forward.

On December 24, 2017, to coincide with a fan meeting titled We Wish You A Merry Christmas the General Manager of BNK48 announced the opening of the 2nd generation audition.

The 2nd generation audition announcement was previously mentioned by BNK48 that they will hold the audition in 2018.

If pass the selection is willing to attend an audition centered in Bangkok City and willing to stay in Bangkok when becoming a member of BNK48.

In addition you should not have a contract with another company when you are accepted as a member. A contract applicant immediately terminates contract in February.

The first stage is the application, the applicants must fill out the form including documents and photos needed.

In this first phase the participants who pass will be contacted by BNK48 staff, this first stage as many as 300 women will pass.

Next they will follow the second stage or round of talent appearances to the judge. In the second round will only be followed by 80 people who escaped. After that there will be a final stage and the announcement of members of 2nd generation BNK48.

There is no certain amount of acceptance for being a member of this 2nd generation. Auditions will be held in Bangkok City, so you should follow the schedule according to the notice.

Applicants who do not attend the scheduled auditions will be disqualified. It should be noted that applicants must bear their own transportation expenses and for applicants from outside Bangkok do not have to resign from school if they have not been officially accepted as members of BNK48.

What do you get as a member of BNK48?

BNK48 members must be willing to attend a series of exercises and jobs such as performances, advertisements, and other business group activities.

Every month, member will receive a salary starting from 4000 Baht or around 122 USD while still a trainee. You can also allowed to resign.