Frustrated AKS as SUPER AKB48 CHINA will not happening

Some time ago, AKB48 fans in China made a scene with a photo that displays the contents of a letter from AKS spread in social media of China. The letter was not directed to Shanghai Siba but to AKB48's promotional company in mainland China 'AKB48 China (Holding) Limited'. 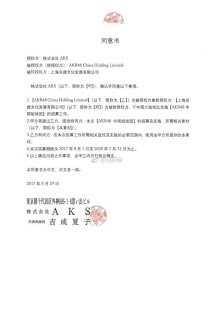 Both AKS and AKB48 China have announced the formation of a new sister group to be based in Shanghai.

The announcement of the audition has been described on AKB48's official blog (26/10/2017) that the new sister group AKB48 CHINA will be held later this year. However, until this December there has been no sign of forming a new group in China.

Although many contra related this new group in fact the company that cope AKB48 is insisted to form a group by giving audition audition through to 2020. In the letter seen AKB48 CHINA allowed to hold auditions from August 1, 2017 to July 2020.

AKB48 fans in China argue that AKB48 China does not want the formation of this group too soon because there is still SNH48 GROUP with its strong idol market. They assume AKB48-CHINA just wants to focus on AKB48's promotional business in mainland China.