GNZ48 will hold the last performance (Senshuuraku) for Team Z's second show titled 'Daihao · Linhexi' which is a set of adaptations of Team XII 'Daihao XII'. 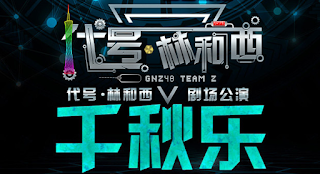 Whereas the second stage of Team Z is just starting its performance on September 15, 2017 and only three months sung. Senshuuraku Team Z will be held on December 31, 2017 at 21:00 specials performances of the new year by GNZ48.

This setlist was announced during the Linhexi Daihao theater performance on September 16th. It was previously informed that Daihao Linhexi is a temporary setlist for Team Z in preparing for the original show.