JKT48 Okta, Manda & Dena step down to Trainee due scandal

Instead of ending, JKT48 again hit by the scandal of its members. Members do not seem to be careful with their status as members of JKT48. After the Vienny case that horrendous fans because proven dating a man some time ago, now 3 other members do the same action. The three members are Dena (Team J), Manda (Team KIII) and Okta (Team KIII). 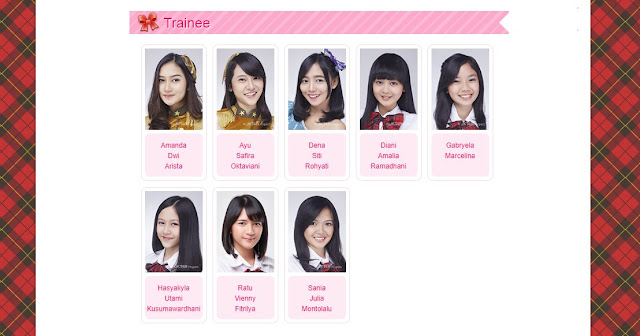 Member of Team J, Dena Siti Rohyati stumbled on a photo case with a man spread across social media. In the photo Dena middle selfie along with a man with a thin mustache. The middle two stuck together like the man was holding Dena's shoulder. When viewed from the style of the picture, it seems Dena and the man may be more than a friend aka dating.

On November 28, 2017 during a Team J theater performance entitled BELIEVE, Dena clarified the photo. Dena revealed that the outstanding photos are true. "Whatever management decision I will accept," said Dena.

In addition to Dena, a few days ago fans were also excited about a video from the instagram story showing Manda and Okta JKT48 and former Chikita members eating with some men. They are cool to play and laugh together and surprisingly there is a boozze on their dining table. Manda who sits next to one of the men also looks close to each other.

The outstanding video was clarified by Chikita through her instagram account, but fans rejects it as they are 'tired' with that bull-s**hit clarification.

Chikita tries to explain that they are in quality time, and they've often gathered like a gank. Chikita also tells that the person in the photo is friends with each other there is no special relationship because it is like your own brother, except Prisca.

Knowing the spread of the video, the JKT48 management immediately appealed to Manda and Okta who would then perform in Team KIII performances and be replaced by other members. At the KIII Team theater performance held on November 30th, Manda and Okta gave their clarification.

"Maybe you all already see my video, but the one you have to know, I'm not what you think, but the fact is that I'm bothering you.I've talked to management.I accept any decision from management.I'm sorry for the size. , "said Manda.

"I'm just like Manda's, I'm sorry, I'm not the same as you guys think, thank you for worrying me too I'll accept the management decision, please help me," said Okta.

In response to this case, JKT48's management through its official website announced a new membership status for these three rogue members. Starting from 1 December, Dena Siti Rohyati, Amanda Dwi Arista, and Ayu Safira Oktaviani are downgraded to become Trainee members. This punishment is the same as that of JKT48 against Vienny.