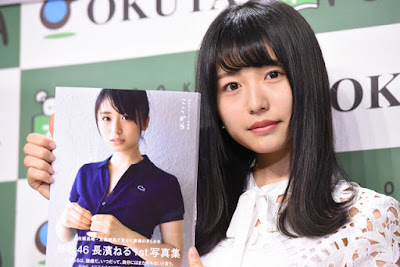 Photobook themed "Seishun [青春 / Youth]" will be a collection of Nagahama summer photos. PhotoBook shooting process was done in early July 2017 and then on the island of Goto, Nagasaki Prefecture, which is a hometown of Nagahama.

Neru also revealed a picture of herself wearing a white dress while playing fireworks as her favorite photo in this photobook.

Regarding shooting in a bathing suit, Nagahama revealed, "To be honest I'm very embarrassed, but the location of the shoot is the beach I visited to study Jibikiami [catching fish with the net] when I was in elementary school because the place is no stranger so I can do it without feeling nervous . "

When asked for one character of Kanji who can represent the journey of one year, Neru replied with kanji "練 [Kunyomi = Ne (ru)]". Regarding her expectations for next year, Neru replied, "I want to try even better than this year."