MUM48 Mumbai, things all you need to know

MUM48 will be under media company named Rashmi Raj Media Pvt. Ltd who formed 2 weeks ago. 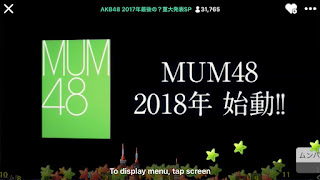 Mumbai is a city in India, mostly, Indian doesnt even know that AKB48 Group are exists.

This was announced by AKB48 Group general manager Yokoyama Yui when performing on SHOWROOM on December 27, 2017. In this live broadcast, Yokoyama announced that the group will be launched in 2018.

Yokoyama commented, "The logo color [MUM48] is yellowish green, it seems the color represents India and describes a growth." Regarding the details of the audition, Yokoyama said it would be announced on the group's official site.