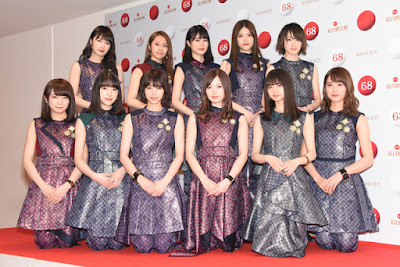 Appearing 3 years in a row, Akimoto Manatsu commented, "I'm still not used to it (laughs), and there's a different tension this year, and this year, Generation 3 comes on, so I think we should look cool."

This year, Nogizaka46 will be performing 'Influencer [イ ン フ ル エ ン サ ー]'. On this song, Nishino Nanase who became one of the centers commented, "I'm happy to bring this song on Kouhaku show" While Shiraishi Mai who also became the center of this song commented, "'Influencer' is a song where we managed to achieve a million sales for the first time , the big thing that happened to this group.On Kohaku stage, I wonder if Nogizaka can climb one more step in the future. "

Regarding the Nogizaka46 journey in 2017, Captain Sakurai Reika commented, "A lot of things happened this year, awards, performing at the Tokyo Dome and performing in Kouhaku 3 years in a row.This year became a confident year for us." When asked the kanji that could represent the journey of Nogizaka46 in this year, Sakurai said, "Yume [夢]. Tokyo Dome, Kouhaku, Photobook, many dreams come true this year."

When asked for Nogizaka46's trip for next year, Akimoto commented, "This February we will be performing in Hong Kong, the activities of Nogizaka46 overseas just started, I want us to be able to go to other parts of the world.The release of Photobook continues, so I think still there will be more members who will release a photobook next year. "

This year, Nogizaka46 will be performing on Kouhaku show with 41 members, minus Kitano Hinako's hiatus from group activities, Ito Riria and Iwamoto Renka who can not appear due to age limit and Ito Marika and Nakamoto Himeka who graduated from the group.