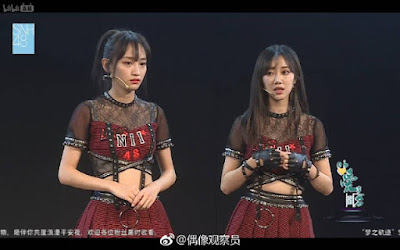 The announcement instantly made fans watching the theater be surprised.

The resignation of Feng Xinduo and Huang Tingting is based on Li Yitong's statement during a live stream some time ago.

At that time Li Yitong expressed her frustration to the fans who voted for the song song unit SNH48 4th Request Time which will be brought together with Huang Tingting. Yet both of them dislike each other. The incident caused many problems among fans and Team NII itself.

Finish the song Hei Mingdan, the members of Team NII simultaneously make an apology by way of bowing.

Furthermore Feng Xinduo and Huang Tingting came in for the MC with the announcement of their resignation from leader status. They wondered that their overcrowded schedules could not meet intimately with Team NII so that many internal problems became the reason for the decision.