From the beginning, SNH48 GROUP is the largest idol group of Asia speaking languages ​​based on the spirit and the O2O internet platform. In its early stand up to now, SNH48 has selected 200,000 more girls who signed up for auditions and 300 people who managed to become part of the SNH48 GROUP family. 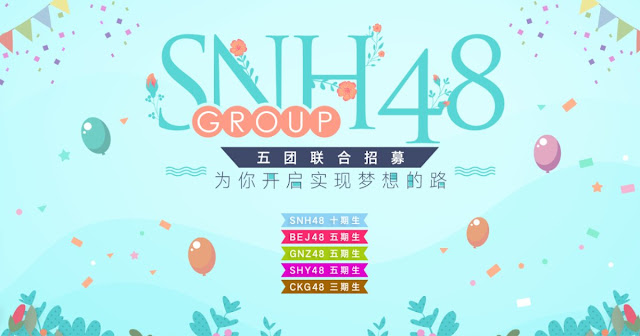 SNH48 re-opened the audition for girls who wish to realize their dream of becoming an idol.

The opening of this audition was announced at the end of the Team performance titled Mengxiang de Qizhi to coincide with the announcement of the 2nd preliminary results SNH48 4th Request Time (3/12/2017).

Here are the conditions that must be obeyed to register auditions:

The girl who dreams of becoming an idol 13-22 years old
Not signing contract with other companies, and willing to sign exclusive artist contract with SNH48 GROUP company

What can you get if you are a member of SNH48 GROUP? Here's a list that will make you want to sign up for more auditions.

The monthly allowance depends on hours of work and member performance, receiving bonuses in theater performances and revenue sharing for domestic and foreign commercial activities.

Capable by professional teachers for vocal development, performances, dance and other physical exercises and skills, go abroad to receive more training and opportunities.

The audition registration starts on 3rd December 2017 yesterday and will close on February 28, 2017. It is also a SNH48 GROUP tactic where AKB48 CHINA will hold an audition at the end of this year. Chinese girls will be provided with two choices of auditions, which ones do they follow?