Sister AKB48 based in Taipei, Taiwan TPE48 is in the stage of three auditions. But lately the participants or first generation member candidates decided to resign. Various reasons such as missing contact with management or personal affairs are the cause. 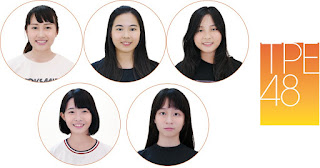 Unmitigated, on December 20 last TPE48 announced a number of 5 participants of this audition decided to reduce himself.

Candidate number 24 is Chen Wenxuan (陳雯萱) for personal reasons deciding to break from TPE48. For No. 37-Yang Qiaoyang (楊巧妤), No. 56-Li Siying (李思穎), No. 58-Chen Yuru (陳 郁 如), and No. 59-Zhang Xin (張 馨) decided to resign for not performing their duties as candidate members and after contacted stated to exit.