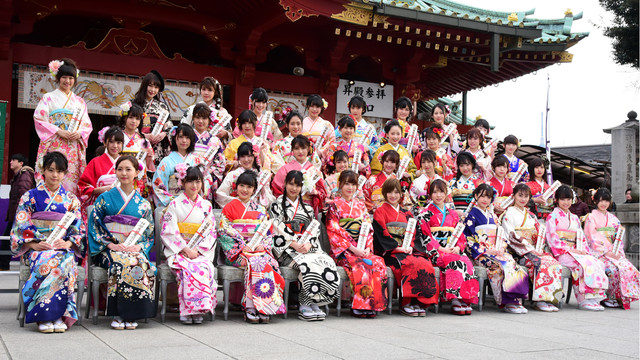 Mukaichi Mion
Eventually I became an adult. Since AKB has just announced a shuffle team, the new team formation will start this spring, I will do my best as an adult member.

Miyawaki Sakura
First I want to say thank you to my parents. A few days ago HKT48 released the album, I want to keep trying hard.

Miyawaki Sakura
There are some members who just know this day is the age ... I want to go to a new future.

What Is The Name For Seijin Shiki Generation This Year?

Miyawaki Sakura
We are the Golden Generation. This is not about me personally, but all members here are members of the future. we will make the AKB feel back to the glorious period.

Your wish For This Year?

Okada Nana
Thanks to the support of my family and the people around me, I am active in various activities. I want to live wholeheartedly as a person as well as an Idol.

Miyawaki Sakura
I want to be ranked first in Sousenkyo this year.

Shiroma Miru
I also want to shoot no.1. On my 20th birthday, I want to be a center in NMB48 also at AKB. Sakura, Let's suppose to compete.