AKB48 Group Members will be tested through Exam Center

January 20, 2018, the AKB48 Group announced that it will hold "Ujian Center [セ ン タ ー 試 験]" which will be titled in 6 locations in Japan namely Tokyo, Nagoya, Osaka, Fukuoka, Niigata, Hiroshima and 3 locations outside Japan namely Indonesia, Thailand and Taiwan. 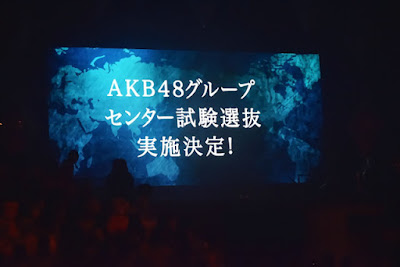 During an encore, a VTR announcement is played, "AKB48 Group Center Exam has been decided!". This exam will test the love of the members of AKB48 Group with questions such as group history, lyrics, choreography and other things that must be known by a member.

Staff have also held an early test for members this month with the highest test score of 67 points and the lowest score 19 points with an average rating of 36.2.

16 members with the highest score of "Exam Center" will become "Senbatsu Spesial" and are planned to release the song.