BNK48 has successfully held the second special single handshake event 'Koisuru Fortune Cookie' at MCC Hall, The Mall Ngamwongwan, Bangkok, Thailand (13/01/2018). This event was followed by all members of BNK48 consisting of Team BIII and Kenkyuusei. 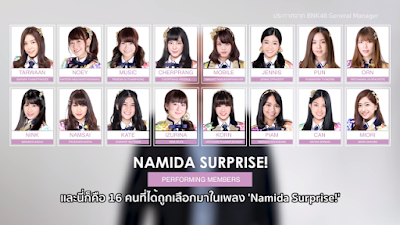 There is little announcement from BNK48 in the handshake event. The General Manager of BNK48 in a video, Nataphol Pavaravadhana announces coupling songs that will adorn the third single 'Shonichi'.

Coupling Song's third single 'Shonichi' will consist of 2 songs, meaning there will be 3 songs with the main song Shonichi. The second tune of BNK48 titled 'Namida Surprise!' which will be hosted by 16 selected members.

Namida Surprise is the 12th single of AKB48 released 2009 ago. This song has been performed by JKT48 under the title 'Tears Surprise!' and is on the first album Heavy Rotation.

The third coupling song is a unit song performed by two members, Anata to Christmas Eve. The song is one of the songs in the set of Theater Team BIII 'Party ga Hajimaru yo'. Members of BNK48 who had the opportunity to bring it were Jan and Kaew from Team BIII.

BNK48 also announced related additional Video clips (MV) made for Anata to Christmas Eve. Filming a video clip will be held next week in Hokaido, Japan.