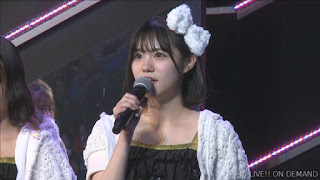 The 17 year-old girl called Yuutan will more focused to continue her study following her graduation from High School this Spring.

Fans were frustrated over this announcement, because they loves Tanaka Yuka's everytime Yuutan take job in gravure magazine.

HKT48 member Tanaka Yuka has announced her graduation from the group. It is announced Tanaka Yuka Kaku Theater Team show 'Seifuku no Me [制ं の 芽]' which was held 30 january 2018.

In her announcement, Tanaka said, "I'm Tanaka Yuka, will graduate from HKT48." Tanaka continued, "I've spent my youth [as an Idol] since I was 12. Around last summer, I started thinking about my future and decided to continue my education to college."

Regarding the graduation schedule, Tanaka Yuka said it will be announced through the group's official website.

Tanaka Yuka joined HKT48 in 2012 as the 2nd Generation group. Tanaka was promoted to Team KIV on 11 January 2014 when HKT48 announced the shuffle team.