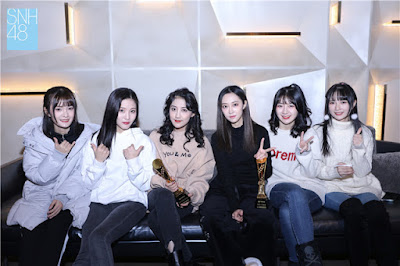 NetEase itself is a platform that presents a variety of entertainment, fashion, music, games, and others. In the event a large variety of awards were read out, and SNH48 and Li Yitong received two awards.

SNH48 was chosen to be the recipient of the award with the category 'Popular Groups of the Year' with high popularity. They also performed the new year song Sweet Festival and got a lot of applause from the audience. Feng Xinduo feels happy and expresses many thanks for supporting SNH48.

"We hope SNH48 gets better with more fans in 2018 and can be together with fans in the new year," said Feng Xinduo or who is often called Nanashi.

In addition to SNH48, Team NII member Li Yitong also received an award individually. Li Yitong received the category award for 'The Most Shining New Artist of the Year'. It was her first award of the year and the third award he got.

"I did not expect the year 2018 to come so fast, I hope this new year can grow in every aspect," please Li Yitong.

In this new year, SNH48 thanked NetEase for their support to the group and Li Yitong. SNH48 hopes to continue the struggle in the new year to give back to fans who always accompany us with better performance.