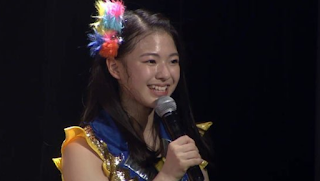 In her announcement, Mizokawa conveyed, "There is something I want to get, Me, Mizokawa Mirai will graduate from NMB48."

Regarding the reason for her graduation, Mizokawa revealed, "About 6 months ago I started to realize that I could not balance my education with activities in NMB48, although many staff were helpful, but I could not convince myself After consultation with family and staff, I decided to focus with my education. "

Regarding her graduation schedule, Mizokawa revealed she has not decided yet.

Mizokawa Mirai joined NMB48 in 2016 as a 5th Generation group. Herself promoted to Team N in October 2017.

Mizokawa Mirai is the youngest and the fastest leaving the group from NMB's 5th Generation.