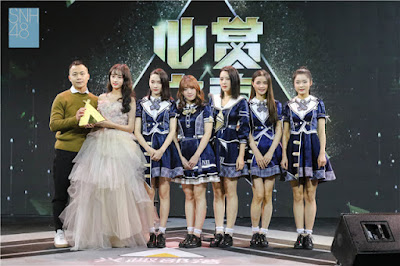 The event was attended by some Chinese super stars such as Zhang Yishan, Chen Xiang, Hu Xia, Wen Qi, and also SNH48. The event held by Tencent won two awards for SNH48.

Huang Tingting appeared in a beautiful dress and the other five members wore my sefuku single Sweet Festival. During the red carpet, Huang Tingting recounted her experience while playing movies and the members promoted the Request Time B50 concert on February 3rd.

SNH48 for the first time in 2018 was awarded for the 'Popular Groups' category. Not only SNH48, Huang Tingting also received the award of 'Best Variety Appearance'. It is not the first time for SNH48 to win an individual level award for members.

In the event SNH48 performed 1 song that is Guang Zhi Guiji song, the song that ranks first in the second while SNH48 4th Request Time Best Best 50.