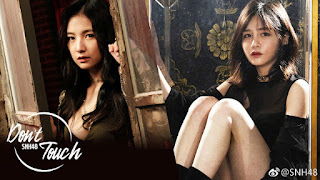 The Don't Touch song became booming after being hosted by Team NII and made it a fans favorite song and reached the first position of Request Time 2017. At that time fans were voicing Ju Jingyi, Zeng Yanfen, and Zhao Yue to perform the song.

Teaser video clip was released on November 15, 2018 and the new MV will be uploaded on January 18th.

Unfortunately, this MV will only involve two members namely Zeng Yanfen and Zhao Yue since Ju Jingyi the song center has graduated from the group last December.

Unfortunately, Zeng Yanfen has also resigned from the group and is currently declared hiatus by SNH48.

But don't worry, STAR48 will release a solo video clip Don't Touch Ju Jingyi version. It was revealed in SNH48's official Weibo, but the release of the video clip has not been informed.