SNH48 lost one of its members from Team HII. Wu Yanwen, a third-generation member of SNH48, graduated from the group on January 5, 2018. She is delivered her previous graduation during the theater performance of Team HII 'Beautiful World' some time ago. 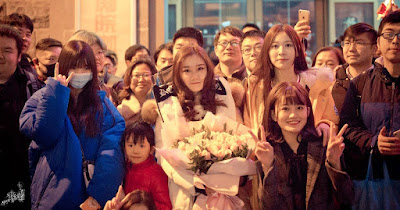 However, the girl who is often called Tutu is not officially graduated from SNH48. This is evident because the profile on SNH48 official website and Weibo officially has not been removed by management.

On January 5, yesterday was her last theatrical performance in the musical 'The Shining Star'. After the show Wu Yanwen came out of SNH48 Star Dream Theater and was greeted by fans and other Team HII members. Then she made her way back home to the hometown.

Wu Yanwen is one of the most talented SNH48 members she proved to have written the song lyrics in SNH48's second election titled 'Mengxiang Gaofei'.