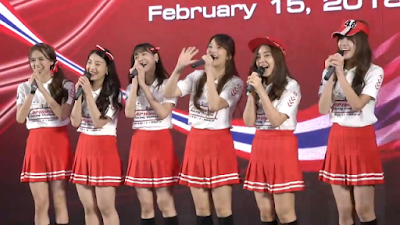 In addition to appearing in the event, there are two important announcements. The first announcement of 4 members of BNK48 will be Team Ambassador A.P. Honda Racing Thailand is Orn, Namneung, Tarwaan, and Noey.

In the press conference was announced new song BNK48 entitled 'RIVER' which will be released specifically to enliven A.P. Honda Motorsport 2018. Right then the center of the song is called Orn (Patchanan Jiajirachote).

RIVER is AKB48's 14th single released on 21 Okrober 2009 ago. At the launch of the RIVER single, AKB48 managed to occupy the number 1 Oricon single sale for the first time.

The single is also popular among Indonesians after being brought JKT48 into Indonesian. SNH48 has also brought RIVER to the mandarin version under the title Jiliu zhi Zhan.

Based on the latest information from BNK48 Office, the RIVE song will be in the album which may be BNK48's first album. RIVER BNK48 version will also be made music video.