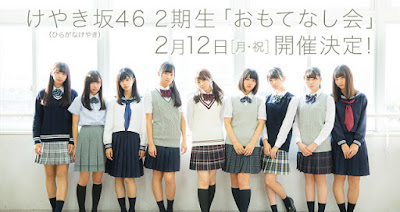 7,000 fans were present at the first 9 member Generation 2 members of Hiragana Keyakizaka46 who joined since August last year.

This Dievent, 9 members of Generation 2 Hiragana Keyakizaka46 are divided into several clubs to show their abilities.

At the Sports Club, there are Kosaka Nao, Nibu Akari, Himagishi Hiyori and Watanabe Miho showing their ability to ride a single-wheeled bicycle and double dutch. Kosaka Nao also showed the ability to spike her volleyball towards the audience. While Watanabe Miho who joined the basketball club showed her ability to perform three-point shoot in one experiment. Watanabe commented, "I do not know if I will succeed in doing it now I am sennag because I succeed."

The event was hosted by Miyata Manamo as MC of the Broadcasting Club.

At the end, Matsuda Konoka said, "I'm really happy to be doing this Omotenashikai event with the fans because we've got a lot of opportunities, we want to catch up with us from our Generation 1 Senpai [Hiragana Keyakizaka46], we'll do our best until can say this is 20 member Hiragana Keyakizaka46, please support us. "