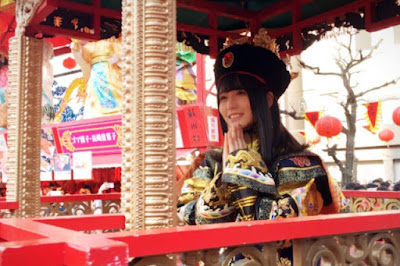 This festival is an event that represents the winter in Nagasaki where more than 1 million people visit during the two weeks of this event was held.

Neru followed this event for about two hours and was greeted by local fans who greeted her with a saying, "Welcome back, Neru chan!"

Following this event, Neru commented, "I am delighted to be appearing as an empress and participating in the lantern festival I've always been in. I'm getting a great experience today and I'm not going to forget it." Neru continued, "I can also interact with each other [with the fans], I can feel the warmth of the people in Nagasaki."

In this event it was also announced that Neru was appointed as the Nagasaki City Tourism Ambassador. Appointed as a tourism ambassador, Neru commented, "A lot of good culinary in Nagasaki and historical sites, I want to spread things in Nagsaki while learning it."

When I got the ambassador's card, Neru commented, "I will share this card with the members, I hope all members of Keyakizaka46 can visit Nagasaki."