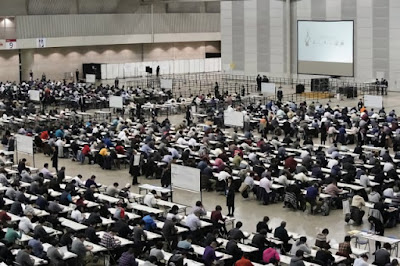 The 16 members with the highest score of the test results will be the "AKB48 Group Center Shiken Senbatsu Special" and are planned to release the song.

Yokoyama Yui [AKB48]
This is more difficult than I imagined, but with this test I again realized that this group is full of history. Through this test I can feel the things passed by my previous Senpai, I'm happy to be in this group. I also hear many fans who say this test is difficult. From now on we want to challenge things and shape the history of AKB48 Group.

Matsui Jurina [SKE48]
This is a new thing for members and fans. 16 members with the highest points will release the song, I want the members to take this opportunity and show the new 48 Group. Undergo this test like nostalgia.

Yamamoto Sayaka [NMB48]
To be honest, this test makes it difficult for both members and fans alike. But this test gives experience and I hope I can enter top 100.

Matsuoka Hana [HKT48]
I'm really learning to face this test, but this test is really difficult. But from this test I also learned a lot of things I did not know before. I want to know more about the history of AKB48 Group and do my best in the future.

Honma Hinata [NGT48]
Honestly, this test is very difficult. During the test, many questions made me think, "Eh there are things like this before I enter NGT48".

Takino Yumiko [STU48]
Through this test I know many things that I did not know before and made me realize the history of AKB48 Group is so deep than I imagined. The questions about STU48 made me smile, fun. But many things I do not know, this test becomes an opportunity to know more about AKB48 Group.