TOKYO IDOL FESTIVAL (TIF) is the biggest idol event in the world which was started in 2010. In 2017, the event was held for three days in Tokyo with 228 groups with 1,480 idols performing and talking on nine stages. The idol event drew the largest audience of 80,000 people. 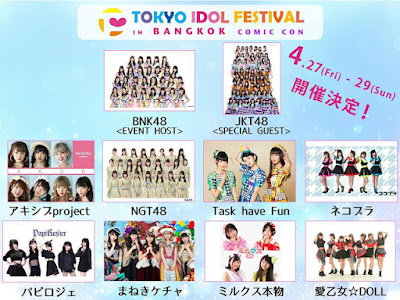 Tokyo Idol This festival is distributing or introducing Japanese pop music culture especially idols to all over the world. The growing TIF event, they will be a thorough entertainment to the world.

As a first step, the Tokyo Idol Festival will be held in Bangkok Thailand in April. TOKYO IDOL FESTIVAL in BANGKOK COMIC CON will be held for 3 days exactly on 27-29 April 2018.

The TIF in Bangkok will be located at Paragon Hall oyal, Siam Paragon Shopping Center !, Bangkok, Thailand. To enliven this event, TIF made an idol group that upholds JPOP culture, BNK48 as the host of this event.

Not to forget there will be several Japanese idol groups that will appear in this event include Akishibu Project, Task Have Fun, Nekopura, PapiRoster, Kecak Maneki, Milcapo Saporo, Lovely ☆ DOLL, and AKB48 group sister in Niigata, NGT48.

In addition to Japanese and local Thai idols, TIF will invite idol groups from Indonesia namely JKT48. The first AKB48 overseas sister group will be the special guest star of the event.

JKT48 is not only known in Indonesia but also widely known by Asian people. So there will be three 48 GROUP that will appear in the TIF event in Bangkok. What would they collaborate on? This is their first meeting, especially BNK48 with JKT48. Regarding the participating members will be announced later.