BNK48 received the opportunity to become a team of supporters from Thailand's National Football Team Changsuek.

BNK48 management said that it is a good opportunity and very honorable to be part of one of the Thai people's love. The group's new debut in 2017 revealed that they would be part of the full support of the Thailand national team. 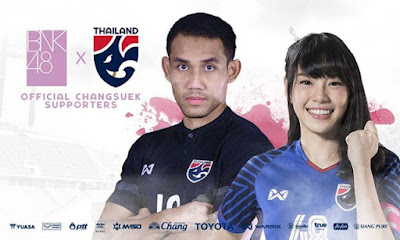 "Football in Thailand is a popular sport of all ages, All Thais are both male and female, young girls, in this case the needs of athletes and teams in addition to training, to keep fans happy and proud of their national team. It is important to be always cheerful, cheerful with all of you every day without any disappointment, " said a spokesman for Thai soccer union, Supapong.

Supapong also added that they are happy to welcome BNK48 who will become the Thai national team supporter. The national team athletes will also work in full in every way. This is a form of football development in Thailand itself.

Changsuek teamed up with the popular idol group BNK48 who will become an official supporter. Thailand's first national football team will attend Thailand 2018 Kings Cup matches on 22 and 25 March 2018. Details on this information will be announced soon.