Following Melody's official graduation, the first generation member of JKT48 is often called Kinal announces her graduation from the group. 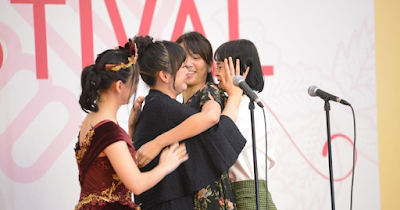 The girl who has the full name Devi Kinal Putri delivered the surprise announcement on her special single handshake Kimi wa Melody (25/03/2018). This reinforced the alleged fans when not appointed Kinal as new captain of Team J to replace Shania at the Melody graduation concert yesterday.

Through a short speech, Devi Kinal Putri also revealed the reason for getting out of JKT48. Here is the speech of the former captain of Team J and Team KIII which has been quoted by Odon from @fansbuih account on Twitter.

"I feel I'm enough here, I'm actually young, so there's a lot I want from the first. Melody also already said going into the JOT (JKT48 Management). At there I thought, you can not get out of JKT48 and help JKT48. I'm JKT48, I mean what I mean, I always love juniors members, because I said, I want if I do not exist, first gen is all graduated, I do want JKT48 better than now.", said Kinal.

The above speech has not been mentioned about graduation. But things get worse after the mouth of the Kinal pronounce the word out and grad from JKT48. "After I came out of JKT48, I want to help JKT48, I want to help JKT48 from behind until JKT48 is more developed again. I also want to say thank you too, even though I'm a lot wrong. I'm always concerned with others.That's also my priority. Devi Kinal Putri from Team J, decided my graduation ", firmly Kinal with a sad face.

The graduation of JKT48's final makes the other members sad and some even cry. After Kinal graduated later, the first generation JKT48 means the remaining six people.