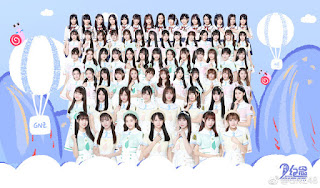 Entering the age of this toddler, GNZ48 continues to be determined to continue to grow and move forward. To satisfy their fans, GNZ48 along with their little idol will bring some special events and special programs to welcome the second anniversary.

The Guangzhou girls who came to grab their dreams, carrying their talents. Trying to reach their dreams, not afraid of obstacles and difficulties.

Sweat, continue to grow, reach one by one dream, the path that lies ahead let's face together. Special day so the formation of the group and the inauguration of 2 years of the establishment of the Theater, GNZ48 will hold a special ceremony of the memorial.

Every year on April 8, is a special holiday for members and fans. On April 6-8, GNZ48 Star Dream Theater will hold the second event of 'The 48 Idol Festival'. GNZ48 has prepared something for the fans, please invite friends and family to participate.

To celebrate GNZ48's second anniversary, Team G, Team NIII, and Team Z, as well as Trainees will work together to prepare for a special special combined show. Will there be any special surprises? Let's see together.

This is a record of the joy of GNZ48 members. The most popular place that every member's story is GNZ48 Star Dream Theater. On that special day, GNZ48 will announce the MVP Theater for every team during 2017-2018.

The small idol of GNZ48 will also be present at GNZ48 Star Dream Theater and Cafe. They will give you the most intimate services, such as being your special cashier who wants to buy merchandise and drink. You can also chat with them there. Do not miss the opportunity! Details about this will be further info.

To commemorate the time GNZ48 spends with fans, GNZ48 has launched an impressive number of memorable two-item items, which are limited in number and should not be missed! For this item there are two, one of them EP and the other is still secret.

On the second anniversary of the founding of GNZ48, GNZ48 will launch the original show or setlist. Each team's original setlist will be staged one by one. Let's look forward to new and original performances by each team.