Who does not know the annual event "Senbatsu Sousenkyo"? A grand contest held by AKB48 to find out who is the best member to be the center in one of the singles through the sound of fan choice. Now, good news comes to the lovers of JKT48. Because the members of the AKB48 sister group from Indonesia that can now participate fully in the event. 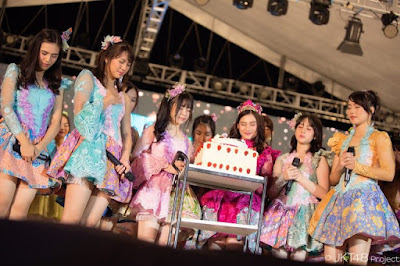 Although since 2014 JKT48 has been doing the same thing every year, but this time all its members can have the opportunity to show off in the international arena facing hundreds of other contestants. Previously, only members who were transferred from the Japanese group were allowed to follow Sousenkyo.

Of course, AKB48 sisters group from outside Japan who can participate in this contest is not only JKT48. The members of BNK48 from Bangkok, Thailand, as well as the newly formed Taipei, Taiwanese group TPE48 are also eligible to run in the event that sets the center of AKB48's 53rd single. Available rankings were also added, from the previous position only 80 large, to 100 large. However, the AKB48 has not yet determined the name of the unit for the 81-100 position under the Upcoming Girls (ranked 65-80).

Members can run for March 23, and registration will close on March 27, 2018. As well as fans can start voting within the period of 29 May-15 June 2018 by purchasing AKB48's 52nd single which will be released on May 30th with the title that has not been determined yet.

AKB48 chose to show their "new face" for their new single by selecting a member of Team 8 AKB48, 16-year-old Oguri Yui to become the center of the single to be released in two months. In addition, Fukuoka Seina (AKB48), Yabuki Nako (HKT48), Yamauchi Mizuki (AKB48 Generation 16) also succeeded in being selected as the single AKB48 singles for the first time.