The status of Nogizaka46 member Shiraishi Mai as a regular model of women's fashion magazine 'LARME' is coming to an end. The 'LARME 034' edition to be released May 17, 2018 will be her last appearance. 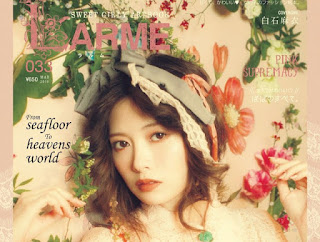 Shiraishi Mai became the regular model of 'LARME' magazine for 6 years since the first edition of this magazine was released in September 2012.

In addition, the edition of 'LARME 033' will be the first performance of AKB48 Team 8 member Oguri Yui selected as the regular model of 'LARME' announced in SHOWROOM 'special program AKB48 Group × LARME Regular Model Announcement Special!' on the 15th of February.