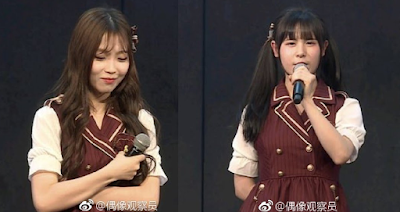 While in the middle of the show, there is an important announcement from SHY48. The announcement was the election of captain and vice-captain of Team HIII SHY48.

Captain-elect Team HIII is Qu Yuemeng and the vice-captain is Zhang Aijing. For the future Team HIII will be led by both. Fans hopes after Team HIII have the captain is hopefully more and more that support the members of Team HIII and SHY48.

Qu Yuemeng and Zhang Aijing were members of the first generation SHY48. Both were introduced during the formation of Team HIII, February last year.