In order to welcome the vigorous spring, SNH48 launched its latest EP entitled 'Welai de Yuezhang' or 'The Future Movement'. This EP is only a reflection of their hearts alone, but it represents a courage and strength to get to the future. The Future Movement is SNH48's first EP in 2018 and is the group's 19th single. 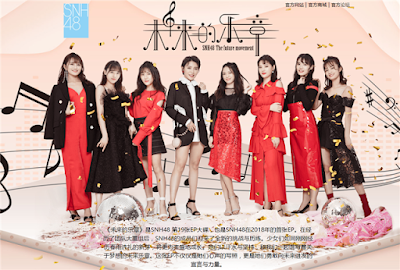 The single will be released on March 26, 2018 at 11:00 CST. Like the new single yesterday, SNH48 also invited their sister group to participate in this single by singing a coupling song that was put into the EP. Weilai de Yuezhang also became the first EP after SNH48 made a team shuffle at the fourth Request Request concert last.

In this EP, the cover will feature 8 captains and their representatives from 4 teams each according to the new shuffle result. It is expected that SNH48 will be better in the future with a new beginning. There will be 6 songs plus the off-vocal version in this 19th single CD. The songs are the same as we have informed some time ago (READ HERE). The EP will be released in two types: Standard Type and Donation Type. Here are the details.

If you buy 10 EPs, SNH48 will provide 1 coupon coupon with two shoot coupons and signature with members. Although the cover is only filled by 8 members who in fact is the captain but this single is still sung by senbatsu which amounted to 16 people from each team.