HKT48 Team H member Yamada Marina announced her graduation from the group during LIVE performance at HKT48 Theater on 10 March 2018. 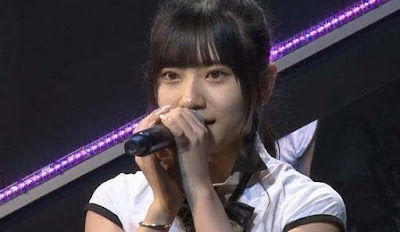 Yamada Marina is HKT48 2nd generation member, she joined the idol group as research student in 2012, and got promoted to Team H in 2014 (HKT48 Team Shuffle).

Note: Yamada Marina is an anime fans and a cosplay lover.

Member HKT48 Yamada Marina has announced her graduation from the group. This was announced by Yamada during the Theater of Megami [シ ア タ ー の 女神] 'performance held March 10, 2018.

In the announcement, Yamada said, "I'm sorry, there's something I want to say here, I, Yamada Marina will graduate from HKT48."

Yamada further explained, "Before joining HKT48, I aspire to be a singer who can sing and dance.This has not been mentioned before to all of you, but I have studied for 2 about Seiyuu at Yoyogi Animation School and will graduate this March.I have learned a lot during HKT48 and have not had any problems in my activities with the group, but I want to change my role from a person who stands as Idol to a Seiyuu, I hope all of you can understand him I want to keep working as much as I can I can be as long as I'm still in HKT48, so please support it to the end. "

Team H 'Theater no Megami theater performance to be held on April 19, 2018 will be Yamada's last performance with the group.

Yamada Marina joined HKT48 in 2012 as the 2nd Generation group. Yamada was promoted to Team H when HKT48 announced a shuffle team on January 11, 2014.