Zhao Dier has been sacked by BEJ48 due to her stubborness

SNH48 GROUP again got a problem, this time coming from idol group based in Beijing, BEJ48. Because the group consisting of Su Shanshan and her friends issued an announcement related to breach of contract by its members. 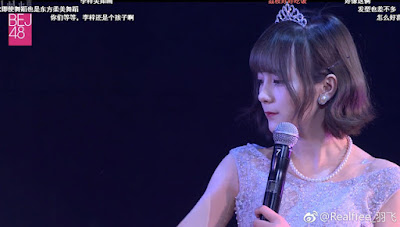 Zhao Dier, a member of the second generation of BEJ48 was announced by BEJ48 has committed a violation of the Members' Code of Conduct (11/3/2018). This is the case after Dier has the ambition to participate in China's latest Tencent 'PRODUCE 101' program.

She is rumored to have come to the company that sheltered the survival event over and over and has done an interview without the company's knowledge.

In addition, Zhao Dier also described BEJ48 often breaking small rules. The rules are like undisciplined and serious in practice, often coming late, absent activities, as well as going out dormitory without permission.

BEJ48 has communicated and advised Zhao Dier. However, the related members did not repent to correct their mistakes and made a big mistake.

Because it had a negative impact on the BEJ48 group's image, it was given a red card by management. This red card means Zhao Dier will be discontinued from all activities as a member, suspended in a theater performance, and not allowed to access Weibo and Pocket48 applications.