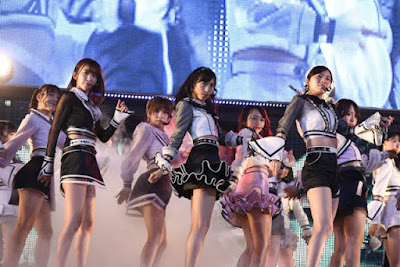 In this concert, for the first time the 52nd single of AKB48's new single to be released on May 30, 2018 will be presented to the fans.

The song is titled 'Teacher Teacher' and Team 8 / Team A member Oguri Yui plays as center. Unlike the plain character Oguri Yui, the lyrics of this song are adul characters which depict the student who teases the teacher.

In addition, for the first time AKB48 uses foreign choreographers to handle the dance movement. For this song, choreography is made by Korean choreographer Park Junhee who also handles SHINHWA's boy band, PSY, and GFRIEND.

I think I will get a kawaii song, because fans and other members also argue that way. I'm often considered best suited to kawaii songs, but in reality I like the cool kakkoi / song like the song 'Teacher Teacher'. This is also a slightly mature song.

(Regarding the lyrical content that tells the story of a student who teases the teacher) I never experienced anything like that, but while singing 'Teacher Teacher', I tried to be a female character like in the lyrics of this song.

This is a meaningful job because I'm handling AKB48's dance koreo song.

Unlike Korean artists and songs that have only one color, the AKB48 has a variety of colors and it is very interesting for me to draw different colors with different styles.

To koreo this song, I include three themes namely cute and dance battle. The entire production staff is very good, I can enjoy every process of work, shooting MV this song has been completed last week and I decided to come to this concert.

Although the workmanship is not rushed by time, but all the members give their best and have the same spell with them to be a fun time.