AKB48 Team Member 8 Hayasaka Tsumugi has announced her graduation from the group. This was announced when Hayasaka and other Team 8 members performed at the AKB48 theater, April 3, 2018. 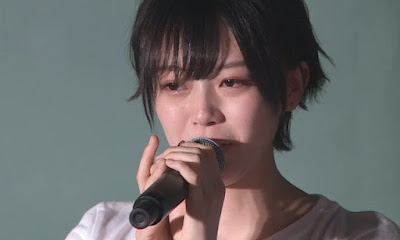 In her announcement, Hayasaka said, "There is something I want to announce here, I, Hayasaka Tsumugi will graduate from AKB48 Thank you very much for your support for the past 4 years."

Hayasaka, who had a hiatus from group activities due to her deteriorating health condition, revealed: "I like Idol, and being an Idol is like a dream for me, but many weaknesses are what I am like Idol rather than other members, like the kawaii-an and the image of an Idol true."

Hayasaka continued, "Gradually I am afraid to stand on the stage and this is causing distress for others, I think I want to find an activity that I can really enjoy seriously so I take the path to graduate from the group."

Hayasaka also announced that there will be no graduation theater performances for her and the performance at Gaishi Hall, Aichi on 29 April will be her last activity with the group.

Hayasaka Tsugumi joined AKB48 in April 2014 as a member of Team of Yamagata prefectural representative. On the 12th anniversary of AKB48 theater in December, Haysayak was announced as a member of Kennin in AKB48 Team A.